On-Board Diagnostic systems are in most cars and light trucks on the road today. During the '70s and early 1980's manufacturers started using electronic means to control engine functions and diagnose engine problems. This was primarily to meet EPA emission standards. Through the years on-board diagnostic systems have become more sophisticated. OBD-II, a new standard introduced in the mid-'90s, provides almost complete engine control and also monitors parts of the chassis, body and accessory devices, as well as the diagnostic control network of the car. 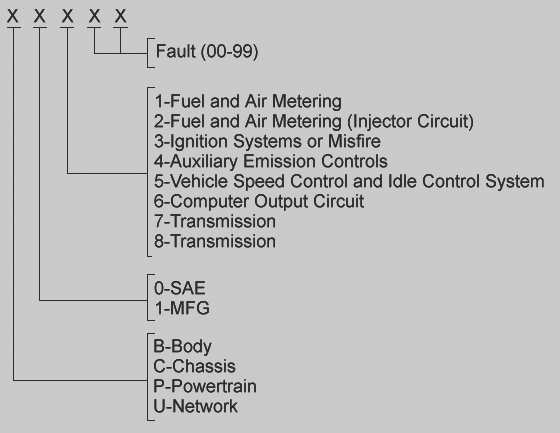 Where'd it come from?

To combat its smog problem in the LA basin, the State of California started requiring emission control systems on 1966 model cars. The federal government extended these controls nationwide in 1968.

Congress passed the Clean Air Act in 1970 and established the Environmental Protection Agency (EPA). This started a series of graduated emission standards and requirements for maintenance of vehicles for extended periods of time. To meet these standards, manufacturers turned to electronically controlled fuel feed and ignition systems. Sensors measured engine performance and adjusted the systems to provide minimum pollution. These sensors were also accessed to provide early diagnostic assistance.

At first there were few standards and each manufacturer had their own systems and signals. In 1988, the Society of Automotive Engineers (SAE) set a standard connector plug and set of diagnostic test signals. The EPA adapted most of their standards from the SAE on-board diagnostic programs and recommendations. OBD-II is an expanded set of standards and practices developed by SAE and adopted by the EPA and CARB (California Air Resources Board) for implementation by January 1, 1996.

Why do we need it?

The Environmental Protection Agency has been charged with reducing "mobile emissions" from cars and trucks and given the power to require manufacturers to build cars which meet increasingly stiff emissions standards. The manufacturers must further maintain the emission standards of the cars for the useful life of the vehicle. OBD-II provides a universal inspection and diagnosis method to be sure the car is performing to OEM standards. While there is argument as to the exact standards and methodology employed, the fact is there is a need to reduce vehicle emitted pollution levels in our cities, and we have to live with these requirements.

Does my car have OBD-II?

All cars built since January 1, 1996 have OBD-II systems. Manufacturers started incorporating OBD-II in various models as early as 1994. Some early OBD-II cars were not 100% compliant.

There are five basic OBD-II protocols in use, each with minor variations on the communication pattern between the on-board diagnostic computer and the scanner console or tool. While there have been some manufacturer changes between protocols in the past few years, as a rule of thumb, Chrysler products and all European and most Asian imports use ISO 9141 circuitry or KWP2000. GM cars and light trucks use SAE J1850 VPW (Variable Pulse Width Modulation), and Fords use SAE J1850 PWM (Pulse Width Modulation) communication patterns. CAN is the newest protocol added to the OBD-II specification, and it is mandated for all 2008 and newer model years.

You may also tell which protocol is used on a specific automobile by examining the connector socket carefully. If the dash connector has a pin in the #7 position and no pin at #2 or #10, then the car has the ISO 9141 protocol or KWP2000. If no pin is present in the #7 position, the car uses an SAE protocol. If there are pins in positions #7 and #2 and/or #10, the car may use the ISO protocol. The CAN protocol uses pins #6 and #14.

While there are OBD-II electrical connection protocols, the command set is fixed according to the SAE J1979 standard.

How do we measure OBD-II output?

Pre-OBD-II cars had connectors in various positions under the dashboard and under the hood. All OBD-II cars have a connector located in the passenger compartment easily accessible from the driver's seat. Check under the dash or behind or near the ashtray. A cable is plugged into the OBD-II J1962 connector and connected to AutoTap or another scan tool. AutoTap is available in PC/laptop. Other scantools on the market range from simple hand-held meters that display trouble codes, up to a large console computer-based unit costing thousands of dollars.

What good does it do to measure OBD-II output?

OBD-II signals are most often sought in response to a "Check Engine Light" appearing on the dashboard or driveability problems experienced with the vehicle. The data provided by OBD-II can often pinpoint the specific component that has malfunctioned, saving substantial time and cost compared to guess-and-replace repairs. Scanning OBD-II signals can also provide valuable information on the condition of a used car purchase.

Tell me about that "Check Engine Light".

The service industry calls the Check Engine light on your dash an "MIL" or Malfunction Indicator Light. It shows three different types of signals. Occasional flashes show momentary malfunctions. It stays on if the problem is of a more serious nature, affecting the emissions output or safety of the vehicle. A constantly flashing MIL is a sign of a major problem which can cause serious damage if the engine is not stopped immediately. In all cases a "freeze frame" of all sensor readings at the time is recorded in the central computer of the vehicle.

Hard failure signals caused by serious problems will cause the MIL to stay on any time the car is running until the problem is repaired and the MIL reset. Intermittent failures cause the MIL to light momentarily and they often go out before the problem is located. The freeze frame of the car's condition captured in the computer at the time of the malfunction can be very valuable in diagnosing these intermittent problems. However, in some cases if the car completes three driving cycles without a re-occurrence of the problem, the freeze frame will be erased.

OBD-II and your car's health

Because of their investment in the equipment required, most repair shops charge a fee, some-times substantial, to attach the scanning equipment and diagnose problems using the OBD-II system signals. Home mechanics and small shop technicians have been restricted from working with these signals by the cost and technical complexity of the equipment. With the introduction of more economical and user friendly scanning devices, it is now practical for almost anyone to access OBD-II signals and use them for their own testing and repairs.

Scanners vary greatly in their complexity. The best connect easily and use software to quickly and automatically call up the OBD-II information. A system connecting to a laptop or desktop computer provides expanded memory for data and a graphing utility.

Though not part of the EPA's OBD II standard, the diagnostic read-outs used by dealership technicians are also read through the OBD II connector. These service codes show you such things as knock sensor operation, FI pulse width, ignition voltage, individual cylinder misfires, transmission shift points and ABS brake condition. There can be over 300 readings available, depending on the vehicle manufacturer and model. Vehicles vary in the readings they will support. Scanners vary widely in the number of these signals that they can read. Some show just the basic OBD or OBD II signals, others show the full range of service codes.

While the vast number of drivers want nothing more than dependable, economical transportation, many of us are looking to OBD-II for extra performance. Earlier on-board computer systems had chips that could be replaced to adjust engine parameters for extra speed and power. While the OBD-II systems are sealed and do not allow chip replacement, they do provide a real time data acquisition system that is useful to tuners.

Power loaders can actually reprogram the performance parameters of the OBD-II system to accommodate performance options. At the current time the number of models they can service is limited, but the range is being extended. Be sure the person doing your reprogramming keeps the car in compliance with EPA emission standards. As aftermarket manufacturers develop additional solutions, we will add their information to our links.

Does My Car Have OBDII ?

Two factors will show if your vehicle is definitely OBD II equipped:
1) There will be an OBD II connector as shown below, and
2) There will be a note on a sticker or nameplate under the hood: "OBD II compliant".

Where is the connector located?

The connector must be located within three feet of the driver and must not require any tools to be revealed. Look under the dash and behind ashtrays.

The Five Flavors of OBD II

While the parameters, or readings, required by OBD II regulations are uniform, the auto manufacturers had some latitude in the communications protocol they used to transmit those readings to scanners. Naturally, each felt they had the one true way, so we have five different OBD II communications protocols in use.

The big scanner consoles costing thousands of dollars include the decoding software and firmware for all five protocols in their units, making them universal. Less expensive units, for home or small shop use, are usually customized for a specific communications protocol. Be sure the scanner you are using suits the protocol of your car.

What Communications Protocol does my vehicle use?

There are some variations among captive imports such as the Cadillac Catera, a German Opel derivative, which uses the European ISO 9141 protocol. If you have first hand knowledge of other such variations, please send them in and, together, we can build a more complete listing.

On 1996 and later vehicles, you can tell which protocol is used by examining the OBD II connector:

A note accompanying this list indicated that certification is for the engine group only.

The models listed are believed correct, but the engine is the deciding factor.

1. Install scan tool. Turn key on with the engine off. Cycle key off, then on. Select appropriate Vehicle & Engine qualifier. Clear all DTC's/ Perform a PCM Reset.

2. Begin to monitor the following PIDs: ECT, EVAPDC, FLI (if available) and TP MODE.
Start vehicle WITHOUT returning to Key Off.

Engine warm-up and provide IAT input to the PCM.